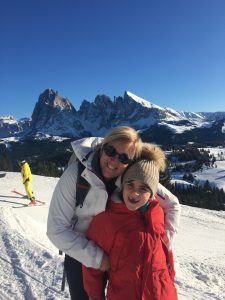 Today, FAST Italy is proud that their country’s first clinical trial for Angelman syndrome (AS), Roche’s Tangelo trial, is currently enrolling patients for a Phase 1 study! Nearly four years ago, when Benedetta Sirtori’s son Pier Luigi was diagnosed with AS, a treatment was unheard of. At that time, Benedetta asked her son’s doctors direct and well-researched questions about treatments and potential cures for her son.  She had found FAST and read about the science, research and the real possibilities to treat the disorder. Unfortunately, many of the doctors she talked to dismissed this research and her questions, saying there would never be a treatment for Angelman syndrome. Benedetta felt like they viewed her as a mom who couldn’t accept her child’s diagnosis. In some ways those doctors were right. She refused to accept the fact that there was no hope for her son. “I think that parents do whatever it takes to grant their child the best possible life,” says Benedetta, “so I could not ignore the possibility of finding something that could change my son’s life.”

In 2017 Benedetta gathered a group of other like-minded Italian AS parents who had already formed a group called Il Sorriso Angelman and flew to Chicago for FAST’s annual Global Summit and Gala. “I was overwhelmed by the science, by the community and by the commitment of the researchers and doctors involved. I found a way to talk to Dr. Edwin Weeber and also to Dr. Jeremy Levin from OVID. After talking with them I decided there was hope and I really felt the need to bring this hope to our families in Italy and to shake up our scientific community and even give our small contribution to global research.”

After the 2017 Summit and Gala, Il Sorriso Angelman had two top priorities: to build awareness of the condition by educating not only families but also the medical community, and also to find a group of clinicians and scientists who believed the research and were ready to work with the organization.

Il Sorriso Angelman began translating FAST Science Summit presentations, press releases and news from FAST. Having this bank of knowledge in Italian has tremendously benefited the entire Italian Angelman syndrome community. Benedetta says that a family thanked her recently for having this information available in Italian so that they could understand what their child’s diagnosis really meant and educate themselves and their child’s clinician about current and future treatments. “This is a great reward for us and I think it shows that we are doing quite a good job.”

The situation has begun to change in Italy. “The scientific community has gained interest in Angelman syndrome and in our foundation. Hospitals started calling to share projects and asking for funding and we realize we can take advantage of this period to let people know about us and our projects,” says Benedetta.

FAST Italy is currently working on developing a biobank to give researchers an important tool to measure therapies.

X
X
BACK TO TOP